LG G6 at MWC 2017: How to Watch Live Stream and Everything We Know So Far

LG G6 is all set to launch at MWC 2017, with LG finally taking the wraps of its 2017 flagship. The device is set to be water and dust resistant, have a large display real estate, and will boast a dual camera setup at the back. LG’s MWC event is scheduled to begin at 12pm CET (4:30pm IST) on Sunday, and users worldwide will be able to watch the event live. 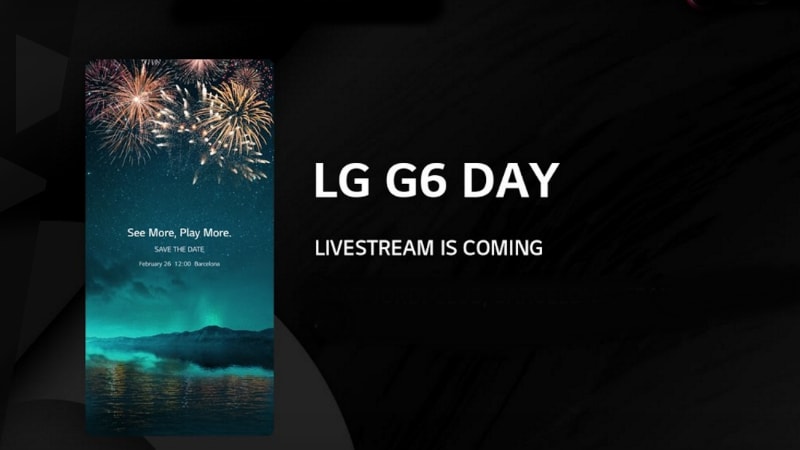 How to watch LG G6 live stream
LG’s event will be live streamed on its YouTube channel here. If you’re watching the stream, we recommend you to be in a strong Wi-Fi connection for seamless broadcast. Gadgets 360 will also be on ground zero covering the event as it happens.

Just a few days ago, tipster Evan Blass gave us official renders of the LG G6 revealing what the phone is expected to look like. The device has an almost bezel-less front with no Home Button seen anywhere. The fingerprint scanner is situated at the back, right below the dual camera setup. The back has a glossy black finish, and appears to be all-glass, appearing set to take on the iPhone 7’s Jet Black colour variant. The antenna band is seen on the metal edges with the volume buttons housed on the right edge. The form factor is said to be the same as the predecessor LG G5, but the display real estate has increased resulting to a 5.7-inch display. In comparison, the LG G5 just had a 5.3-inch panel.

The LG G6 will sport a new UX 6.0 with many tweaks. Notably, the Camera UI will completely be changed and will have a new square capture mode which will allow you to click and preview square-shaped images on one screen (thanks to more room on display). It is also going to be water and dust resistant, as teased by LG earlier, and will come with wireless charging capabilities.

As mentioned, the LG G6 has been teased extensively in the past, and the company has already confirmed a large bezel-less display. The device is expected to sport a 5.7-inch QHD (1440×2880 pixels) display with an aspect ratio of 18:9 and pixel density of 564ppi. The smartphone was expected to sport the latest Snapdragon 835 SoC, but now it is tipped to come with a Snapdragon 821 SoC as Samsung has grabbed the rights to first launch the processor with the Galaxy S8.

As for optics, the LG G6 will sport a Leica branded dual camera setup at the back (two 13-megapixel lenses), and is expected to offer a 125-degree wide-angle view at the back. A fresh teaser confirms this, while also further goes on to say that the setup won’t bulge out of the frame, and will sit in line – which means no camera bump. It is expected to pack a battery larger than 3200mAh. It is also tipped to come in White, Black, and Platinum Colour Options. The big highlight is rumoured Google Assistant integration, making it the only the smartphone to come with it, apart from the Pixel devices launched last year.

There is no official word on release date, but we expect it to hit main markets like the US, and Europe soon after unveil. We are just hours away from the official launch, where the pricing, availability, release date, and specifications will all be officially unveiled.